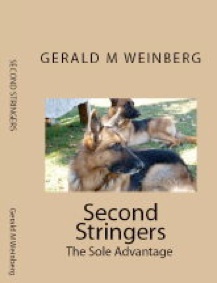 A sequel to First Stringers.

As its name suggests this book follows on from First Stringers. I read First Stringers first and Second Stringers second! I loved them both. They both have the same super short chapter format and both hooked me as soon as I started.

The characters and the sci-fi plot are rich and the imaginative twists and turns are as delightful as they are surprising. The characters have real character – you really feel you start to know them. Their powers are well beyond the (current) realms of reality but their humaness and their flaws aren’t. Heartily recommended. – Mr. J. Jagger