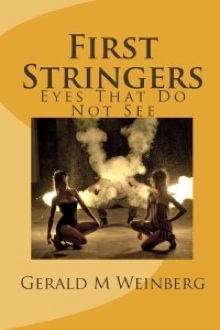 Review: Don’s Thoughts on the Matter

This last week, I read “First Stringers – Eyes That Do Not See” by Gerald M. Weinberg. It was a captivating delight.

Jerry lets the reader meet and greet the main characters over the first three chapters and then lets the plot turn and twist its way into the reader’s imagination.

I could talk about the book: setting, characters, plot, and themes, but I don’t want to give too much away. You can read the free chapters and see what you think.

One of Jerry’s aims is “Helping Smart People Be Happy.” Jerry’s a smart guy. He knows stuff about stuff. But most of all, he knows that smart people, people who think, people who ponder… yes, people who read books, need help. We need help in learning how to be happy: Learning how to view our gifts, our world, and our parts to play.

This novel continues in that vein. He has created robust, smart characters, installed them in the present day Southwest (the Four Corner States), and has given them meaningful problems to solve.

Against that backdrop Jerry continues his quest to help smart people be happy, this time, as we are carried along with the main characters through a suspenseful plot that twists and turns on its way to a satisfying, but open-ended conclusion.

Now I’m on my way to download the sequel: Second Stringers – The Sole Advantage.

Great read. I like the idea of the mutants. Definitely, will re-read again. – l3wilso

I really liked this book! The concept of people with disabilities and special powers, all born almost at the same time, was very interesting. I especially liked the character of George. The book is rather well written and it never got boring, but I was a bit disappointed with the ending.

But I’m looking forward to reading the second book about the Stringers! – Releanna

Disabled mutants trying to find a place in the world without presenting themselves to it. Each individual holds a unique ability, but at a cost. Blind, deaf, down’s syndrome, crippled, something is sacrificed. Certainly not poster children for mutants or even superheroes, these young adults must find both each other and themselves while somehow avoiding those who’d exploit them.

That was a good read. A little hard to get into at parts but well written. I really like the idea that holding that much power requires some form of sacrifice. Sort of a balanced trade instead of having everything handed to you on a platter. The author isn’t squeamish about describing his crippled heroes, nor does he go overboard creating superhumans.

I recommend this to anyone who’d like a different approach to superpowers and doesn’t mind a long read.- cat8864

This book is about a group of people with extraordinary abilities. What is most interesting about this is that the individuals with these abilities also have a physical problems such as but not limited to blindness. This means that the rest of the word over looks them and treats them as cripples.

I am only half way done with this book and I absolutely love it well worth the read! (4 stars) – sallyawolf

This book was an interesting read that always kept me wondering what would happen next. The book focus’s on a group of young adults who were born with deformities but also special powers. As they find each other and their lives become integrated you can see the character’s growing, although sometimes their stereotypes getting a little grating. Because they are complex people, however, you can care for them and care about what happens to them. On occasion the shifts in point of view can be disorienting but it doesn’t take long for the author to tie the new views into the progressing storyline. The start of the book is wonderfully written but the end feels a bit rushed as if the author was trying to fit into a page or word count. This book could perhaps have been two separate stories. The ending leaves lots of room for a sequel. I enjoyed the read overall and if a sequel is released I hope to read it as well! – Unidragon

Weinberg has produced a delightful book that kept building both in story and in character development as you progressed. The processes of ferreting out the puzzle pieces with the characters as the adventure took them out of their comfort zones is exhilarating, and just when you think you see the outline of the picture the author brings in new characters and information to make you start all over again. Adventure. Mystery. And something … unusual. – tlcalderone

I got interested into the book because of its blurb.

Anytime I opened the book I ended up reading a dozen or more chapters in a row; sometimes till the crack of dawn (no joke).

Even so the nearly 500 pages took some time to read, but still I was sad, when I reached the last page.

The story unfolded and evolved at a good pace; I never lost the interest (too slow) or the overview (too fast).

In hindsight I think, it contains some “teens get responsibilities and grow mature” morale, but that was a very fine underline and not in the way.

The ending was a good closure for the first part, but left enough space (cliffhanger anyone?) for the second part.

Which I will buy right now, so my review is over.

I heartily recommend the book for any reader who likes “super power” stories with a twist.