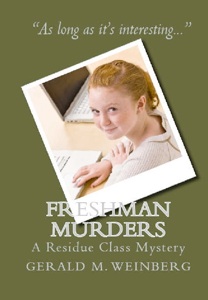 Freshman Murders is a “Nerder Mystery,” which means that the detectives who solve these crimes are nerds-brilliant individuals whose social skills may not equal their skills in mathematics.

Josh Rosemont, finds a young woman’s body in the woods. He is paralyzed by her resemblance to his murdered daughter. He is enraged into action by an obstructive Dean. Teaming with his cop-turned-anthropologist wife, Carmela, and his four genius grad students, he sets out to prevent another murder.

The recipe for a compelling murder mystery is scarcely mysterious: consummate hubristic villainy blended with dashes of fascinating characters of divers backgrounds and avocations, pinches of perplexing puzzles to solve, and slices of near total despair revived phoenix-like by daring ingenuity keener than a razor’s edge. Gerald Weinberg’s “Freshman Murders” delivers all of this and more in an artful concoction of corporate intrigue and homicidal mayhem set in the presumptively serene world of academe.

The protagonist, mathematics Professor Josh Rosemont – already intensely engaged in assisting government prosecutors in decrypting the financial records of a nefarious corporation under an ever-looming trial deadline- becomes a reluctant detective in a set of gruesome murders perpetrated around the confines of Hurlesburg State University. Josh, however, although deftly wily and capable, is not a lone omniscient sleuth. He has the inestimable support of his loving wife Carmela, an anthropology professor and former police detective, as well as that of a multicultural collection of brilliant young researchers and students.

As the plot unfolds, it is perfectly seasoned with both surprising suspects and nearly overwhelming obstacles and challenges to be overcome. From soup to nuts, “Freshman Murders” is one deliciously satisfying meal of a novel that, even to its very last bite, remains a thoroughly tasty treat with a curtain-closing line to be savored for many days after.

I encourage any and all to pick up “Freshman Murders” – a murder mystery meal from which you will find yourself leaving the table especially well sated.

I’ll admit it. Math is not my strong point, but I love a good mystery. Gerald Weinberg delivers exactly that with “The Freshman Murders.”

Professor Josh Rosemont not only teaches theoretical mathematics at a small college in upstate New York, he’s the go-to man when his friend, the President of the United States, needs impossible encryptions cracked. To help him with his work, Rosemont’s put together an international team of crackerjack graduate students who call themselves the “Residue Class.”

What would distract a man like Rosemont from working on decrypting documents vital to the government’s case against a corporation accused of funding terrorists? An equally important case that strikes closer to home — a serial killer who’s murdering freshman girls on the college campus where Rosemont teaches.

A killer who leaves mathematical clues behind.

A killer who has his sights set on the newest member of the Residue Class — brilliant fifteen-year-old freshman Libby Myers.

“The Freshman Murders” skillfully weaves the threads of the two cases tighter and tighter together even as Rosemont feels himself pulled in two directions at once. The kids in the Residue Class are all stars in their own right, especially Libby, who’s no one’s easy victim. While mathematical riddles and clues play an important part to the mystery, Weinberg provides his readers with just the right amount of information to carry us theoretical math-challenged mystery lovers along for the ride. And what a ride it is!

A mystery that adds up

Don’t let the math scare you. Yes, the sleuth is a Mathematics professor, who leads a team of some of the best young minds in mathematics. And, yes, there are math jokes and even one young character signing the names of famous mathematicians. In fact the insight into that world and mindset adds greatly to The Freshman Murders.

From palindromes to linguistics to astrology to higher mathematics, the clues challenge the reader. They’re considerably less challenging for genius professor, consultant and sleuth Josh Rosemont, although he and his cohorts still must try to jump from what the clues mean to what they might predict, as they struggle to bring down a corporate villain in a court case and to stop a murderer of freshman girls on their college campus.

The threads of these two cases and their investigations intertwine and loop and tangle. Like a set of Russian nesting dolls with layer after layer after layer of puzzles – what more could a mystery lover want? Unless it’s an intriguing case of characters, led by Josh, his ex-cop-now-anthropology-professor wife Carmela and the international protégés they collect.

In “The Freshman Murders,” author Gerald M. Weinberg introduces the “Residue Class,” a team of top-flight computer scientists and mathemeticians led by Josh Rosemont, a retired NSA agent now teaching theoretical mathematics at a small college in upstate New York. The team’s current assignment: to decrypt documents vital to the government’s case against Solarian Natural Gas, a corporation that has been linked to funding terrorism. But with time running out, they find their efforts hampered by lack of funding, lack of resources, and the arrival of a serial killer with an uncanny knack for placing the victims’ bodies — Freshman students at the college — right where Josh will find them.

The pacing of the book is slow at first, but picks up as you go. Along with Josh, the reader is distracted from the NSA case by the increasingly personal aspects of the Freshman Murders, only to discover that the two seemingly unrelated cases are more closely linked than anyone at first suspected.

An intriguing read, peppered with mathematical puzzles and glimpses into the personalities of characters not normally associated with intrigue and espionage. If you like stories where smart people use their brains, rather than sheer brawn, to get out of difficult situations, you’ll enjoy this book.

This book is similar in style to many others I have read, by well-known authors, and as such I came into it with very high expectations, especially having read other works by Gerald. I won’t go into the plot in huge detail as others have done in their reviews, just give an overview of my experiences with the book.

Initially I was put off by the style of the book, as I felt the author was trying too hard to prove how clever he was, at the expense of me the reader. However, this initial irritation did not continue as the book started to develop the characters and the situation. The story arc concerns a group of people (Professor josh, his wife Carmela and his students) who are initially trying to decode data from a multi million dollar company, at which point a series of murders take place. The cases are well developed throughout the book and the reader becomes more and more engaged as the story continues. The story itself is well paced and draws the reader in more and more, which is good as there are complex mathematical and computer based concepts to understand. Luckily these are explained well and never detract from the novel.

It was nice to see relatively well rounded individuals, however, it did feel slightly too ‘geeky’ in places – perhaps it could have benefitted from more ‘ordinary’ characters but there was a good balance of male and female characters who all are similarly intelligent.

Towards the end of the book, it upped the pace and I could not stop reading it to the end. This pleased me as I like to be engaged right to the end of any book and this did not let me down.

All in all if you like modern crime-based thrillers, give it a try!!

Plot summary: Josh Rosemont is a renown mathematical renaissance-man, former NSA problem-solver, and now a professor at a medium-sized state university. He and his student group of mathematic and computer students not only aid in cracking the codes used by a multi-million dollar international syndicate, but work on finding a serial killer who’s been targeting freshman girls — including one of the group members. His wife, an anthropology professor and former law enforcement officer, with a bit of a sex obsession, rounds out the private portion of the investigative team. Each of the cases becomes more complex as the group nears solving each.

All of this makes for a good mystery story, with lots of mathematical arcana to please the imagination of the science-leaning crowd. Most of the characters are a reasonably well rounded, with occasional ventures into unbelievability (e.g., a college dean monkeying with the admissions process to bring in less-qualified white students in place of more highly qualified black applicants). In other cases, the stereotypes and fads may reflect a dominant campus theme, but they irritatingly interfere with the story at times.

All said, I hope that this is the first in a series starring professor Rosemont and his Residual Class group.