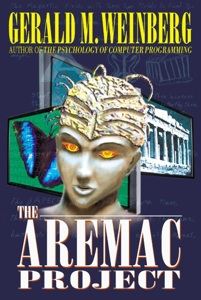 Young genius Roger Fixman is unprepared for what happens after inventing Aremac, a machine that extracts pictures from people’s minds. The legal system is thrown into chaos. Corporations play dirty tricks on Fixman to steal the patent and grab the profits. Terrorists holding Chicago hostage want to destroy Fixman’s machine before the FBI discovers their plans by using Aremac to interrogate a captured bomber.

When the prisoner is murdered in custody, the FBI accuses Roger’s cousin. Though his wife, Tess, knows the identity of the real murderer, a programming flaw in Aremac has rendered her unable to move or communicate.

Can Roger correct the bugs and save Tess before her body fails? Can he prevent Aremac from falling into unscrupulous hands? Or will, once again, age and treachery triumph over youth and hope?

Sample and/or Buy the ebook through:

“A thrilling glimpse into the near future. Don’t miss it!”

“The Aremac Project” is a thrilling story about young geniuses, terrorism, FBI agents, bombs, a mind reading device, and above all it really is a story about a software development project. If you’ve read any or some of Weinberg’s other books you’ll see pieces of wisdom sprinkled throughout the book. – Magnus Ljadas (Sweden)

“The Aremac Project combines the best of thrillers and science fiction in slam-bang near future action-adventure. Technology, love and the underpinnings of our society intersect in Weinberg’s fast-paced story. Now I just wish he’d go ahead and invent the real thing.” – Jay Lake, author of Mainspring from Tor Books

“Gerald Weinberg’s THE AREMAC PROJECT is a page-turning science fiction/technological thriller that successfully combines wish-I-had-that futuristic technology with today’s political and security climate. Smart characters, ingenious science, and plenty of twists and turns–this is a book you won’t be ready to put down until the last clever move is played out.” – Robin Brande, author of EVOLUTION, ME, AND OTHER FREAKS OF NATURE, Knopf/Random House, 2007. www.robinbrande.com

“I enjoyed The Aremac Project. It was original and compelling with vivid details and memorable characters — characters I cared about. It was one of those books that kept me turning the pages late at night when I should be sleeping.” – Adrian Nikolas Phoenix, author of A RUSH OF WINGS, January 2008 Pocket/Simon and Schuster.

I suggest you give Weinberg a try.

This one’s a bit of a sleeper, a near-future thriller built around neuro-science and nanotech by one of the giants of the IT revolution.

The key characters are Roger Fixman, a near-genius Muslim- American engineering grad student, and his equally brilliant girlfriend/co-worker Tess Myers. Working for Professor Wyatt, an exploitative faculty member whose entire reputation rests on work he has stolen from his students, the pair develop a machine that can capture images from a person’s memory.

As is happens, the FBI has a captured terrorism suspect, severely wounded in the latest of a series of bomb attacks that have ravaged Chicago. And Wyatt, who has been working with the FBI, sees a way to maximize his value as a government asset by developing his students’ machine into a practical way to read the suspect’s memories.

Weinberg throws a couple of curves right off the bat: first of all, Roger’s family are thoroughly unlikely potential terrorists. Except for his cousin Azara, who has demonstrated for religious freedom for Muslims, they are more interested in running their businesses and leading a happy family life. Second, Tess is by a lot of measures even smarter than Roger — although she lags slightly behind his genius-level engineering abilities, she is far more attuned to the way the everyday world works.

The major plot complication arises when Wyatt’s FBI contact press him to speed up the development of the memory- imager in response to an escalation of the terrorist attacks. Against their better judgment, Roger and Tess skip to trials with human subjects — Tess volunteers — and something goes wrong. Tess is suddenly paralyzed and incapable of communicating. Now Roger has to complete the project himself — while worrying whether Tess will ever get back to normal.

I’d describe Weinberg as more an “idea man” than a smooth stylist — but he has plenty of ideas, and a ways of making them convincing. He has a likable pair of protagonists, a supporting cast that manages to avoid stereotyping, and he contrives to keep a few plot surprises up his sleeve for the final showdown. Probably the closest comparisons among established SF writers would be Robert Forward and James P. Hogan. If that’s your kind of reading fare, I suggest you give Weinberg a try.